I’m Not With The Band by Sylvia Patterson

I read a lot of good reviews and interviews in the press about this book and was looking forward to it. Surprisingly though, given the way it was being promoted in the media, it was incredibly difficult to actually go into a book store and buy it. 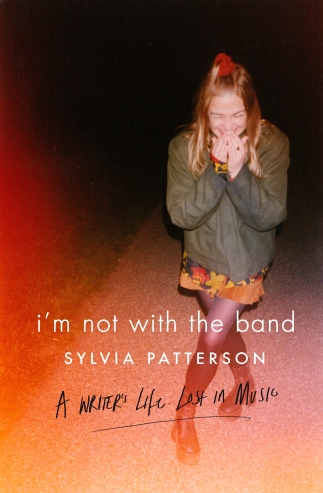 Nobody was stocking it and I had to resort to actually ordering it in.

Headline wise for this book, I found it a little disappointing. I think I was expecting it to be more like Mark Frith’s excellent memoir of his time as editor of heat magazine, The Celebrity Diaries, which is witty, interesting (even a page-turner?) and full of anecdotes. Patterson I think tries to achieve this but doesn’t quite get there. If anything it’s more of a personal memoir than explicitly a firsthand exploration of the world of pop music journalism from the 80s to now, which is what I was hoping for. I don’t begrudge her including swathes on her personal life, the relationship she had with her parents, her boyfriends and flatmates or her drug use but I felt a little cheated in retrospect. It got to the stage where I was thinking “oof, I should really pick that up again and get another chapter out the way” rather than me actually wanting and looking forward to reading it.

Truth be told, writing this a few weeks after reading it, there’s very little of her showbiz anecdotes that I remember. There was tales of her conversations with Prince (by far the most interesting thing in the book), Madonna and Westlife but even then it feels like you’re reading the exact same interview that would have been published at the time with the occasional side swipe thrown in. I don’t feel like I got to experience anything new or see these huge superstars from a different perspective. A shame really. Danny Baker’s first autobiography, which I read earlier in the year, seems to have a better and more amusing ability to balance personal life stories with celebrity interaction.

Holding The Man by Timothy Conigrave

For a book which is held in such high esteem over in Australia, its country of origin, I was surprised by how few people are aware of its existence over here and how difficult it was to buy a copy this side of the world even though it’s been turned into a very famous play. I ended up getting it shipped to me direct from Aus in part because, I think for the first time in the history of the world, the movie tie-in cover was actually more attractive and better than the original cover. By happy coincidence the film was also added to Netflix UK recently so I set out to read the book first and then watch the film. More on my experience of that in September’s watchlist.

This is another memoir and you’re aware of where it’s headed before it’s even started. Both the author and his boyfriend died of HIV and AIDs related illnesses with Conigrave only finishing the book mere days before he himself died. Exploring his life in the first person from around the age of nine, he revisits his time in a staunchly Catholic boys school and how he grew up and discovered himself and all the usual gubbins. There was a period in my life when I feel like I watched about a billion coming-of-age films as some kind of antidote for the fact I was failing to come-of-age myself. I was just kind of bumbling on, getting older but not feeling like I was having any new experiences first hand. It’s actually only now, having left home, that those cogs are beginning to turn and I feel like I am indeed ‘living’.

Anyway, that aside, it was refreshing to read a gay coming of age story. The book is, dare I say, quite filthy in the first half. There’s a lot of sex scenes, some based with boys at school and others (eventually) with his lover John Caleo. I won’t lie and say these weren’t enjoyable but there’s a very sharp change in feel from being carefree and sexual in the first section to the second half of the book when things begin to come to a painful head. One of the most fascinating things for me is that although Conigrave grew up in a Catholic school in the 60s/70s Conigrave had numerous gay experiences seemingly very easily and was actually surrounded by a surprising number of gay men. Even some of the teachers/priests at the school were out as homosexual (admittedly ‘celibate’). There was still the expected homophobia from some however, notably John’s parents.

Conigrave is clearly a very flawed person and has different ideals from his partner John. Reading the book, I think in retrospect he realises his flaws and in part apologises for them. His adultery is the stand out one but Conigrave is also quite a selfish person. Not hugely at the expense of others but it’s clear he doesn’t consider other people’s feelings until after his own – he nearly announced he was HIV+ at his sister’s wedding for example. An important book? Definitely. It’s a really solid look back at the gay plague and its spread in the 80s. Conigrave redeems himself and his poor character by the huge amount of HIV and AIDs related outreach work he throws himself into at the time, and this is probably a defined turning point in him as a person.

This is a book that I can guarantee I will return to and read again at some point in the next eighteen months. Indeed, this was the first book that I’ve picked up and read cover to cover in 24 hours since I was an early teenager. I’d forgotten what it was like just to sit and be lost in a world and a story (be it fiction or non-fiction), given how busy we all are and the working life I now lead. A must read.

Mapping The Future For a song that was only a minor mainstream hit, its implications for op music going forward were wide-reaching and it’s still sampled today. The Yeah Yeah Yeah’s Maps and its influence is analysed in detail.

How’s the book coming along? All writers dream of writing a book. What happens when you’ve got the time and a great idea? An honest reflection on the process and how your enthusiasm for your own project can wane.

Face Up To The Facts Some people have better facial recognition than others – that’s just a fact. Indeed, there’s a known medical diagnosis for those who struggle to place faces called prosopagnosia. This explores the opposite side of the spectrum and how people with amazing facial memories are helping the police catch criminals often long after the case was opened.

Harder, better, faster, stronger! With the ‘limpics this month, the New York Times created five explorations of what makes some athletes at the top of their game quite so special. There’s five in total and it combines text with diagrams, videos and interaction.

Droning On Drones for military setting seemed to have passed into the public consciousness as acceptable; we are now unquestioning as to whether they’re morally right or not. But if the technology exists for the ‘good guys’ then surely when you flip it on its head then there’s a whole load of evil they can do… how do we stop the killer robots?