Quite a light Watchlist this month. I know February is the shortest month but that’s not really an excuse – I just happened to have one of my cultural lulls.

A few months ago there was a thing doing the rounds on Twitter: what was the first news story you remember? For me, I’ve an awareness of Dr David Kelly’s suicide back in 2003, the 2001 foot and mouth outbreak, the looting of the MSC Napoli in 2006, the Securitas depot heist (which I was fascinated by) also in 2006 and of all things, Dr Martens going into administration in 2003. Not all exactly major stories but those are the ones I can remember from being under the age of 10.

A lot of people around my age, however, were stating the Shannon Matthews case from early 2008 as one of their strongest news memories. I had no recollection of it whatsoever and had to ‘do a Google’. It still rang no bells. I’ve no idea what I was up to in Feb 2008 but clearly I wasn’t paying that much attention, even though I “read” the newspaper every afternoon after school religiously between the ages of seven and fourteen.

This drama based on the circumstances surrounding Shannon’s ‘disappearance’ was superb, a really great period piece and, from what I can gather, incredibly true to real life events. Hell, the casting and costumes were outstanding too – compare and contrast the genuine protagonists in the saga with the drama cast and you’d be hard pressed to tell which is which. At no point did the version of events appear over-dramatised either, which is worth congratulating. If this was a Channel 5 drama (do they even still do them?) I imagine it would have had a very different feel.

Further Back In Time For Dinner

Words cannot describe my love for this programme. Casting really hit the jackpot when they found the Robshaw family. We first met them a couple of years ago when they time-travelled from the 1950s to the 1990s, exploring family life through cuisine; there was a subsequent Christmas special exploring the festivities through the ages and when I had accepted that I’d never see them again* – up they pop! This time they’re heading back to the start of the 20th Century, travelling from 1900 to 1949. It’s an absolute treat to watch – and there’s a new ‘character’ too. It’s fair to say the Robshaws are middle-class** and given the period they’re travelling through they’d have a maid so up pops Debbie! Representing the working class, Debbie’s a Northern lass who represents the change in fortunes for women through their expanded roles in WWI and WWII, their liberation, expanded horizons and gaining of the vote.

I assume this will be the last time we see the Robshaws but I desperately hope it isn’t. Rochelle is an icon for the ages. 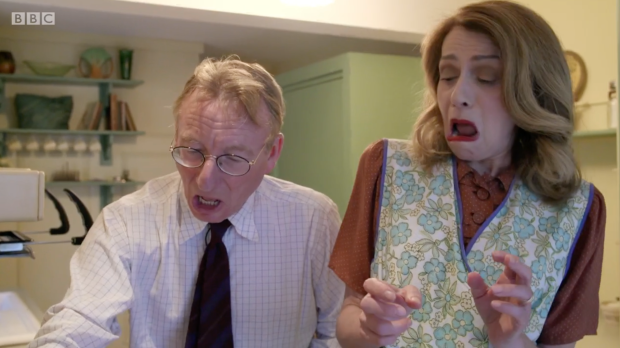 *Back In Time For The Weekend, charting leisure activities through the ages, tried so desperately to replicate the success but the family just weren’t as great as the Robshaws.

**it was pointed out during the series that tracking working class diets and advances sadly makes less interesting television because there aren’t that many changes. Fair enough.

You wait for a half-decent impressionists show on the BBC and then two come along at once.* There seems to be a dirth of comedy sketch shows these days after they bred like rabbits again in the mid-00s, but if there was a venn diagram of sketch + impressions, the Tracey Ullman Show would be bang in the middle. I enjoyed S1 having barely been aware of Ullman’s work up to now, and S2 seems to have been commissioned and made surprisingly quickly – or possibly S1 was just on the back burner, made but not-aired for a while.

Obviously with any show of this nature there are weaker and stronger characters, but Ullman really does deliver with aplomb. Her Adele when speaking may not be as great as Robinson’s in The Agency but Ullman has a trick up her sleeve: each episode features one or two sung sketches and these are superb. The lyrics are great, the cinematography is great – it all looks the part and really sets it apart from other comedy series of a similar ilk, I’d say. Enjoyable half hours, get on them. 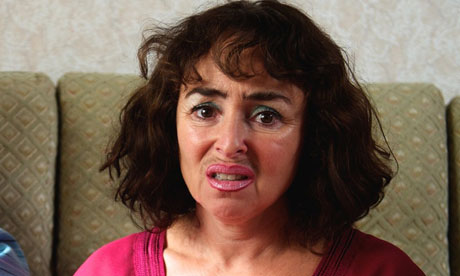 Whenever I’m in a cultural lull (or indeed a general life lull) I often return to an old favourite. I tell myself that I’ll only watch the one episode or, if I am going to watch more than one, I’ll space it out over a period of ten days. Once again that didn’t prove true here – I rewatched S2 over a couple of days. Grandma’s House S2 has the aura of being an improvement on the first. Some people didn’t like S1 and I’m not sure they’d necessarily change their mind with S2 but it remains understated, slightly plodding and with a great amount of pathos. The situations seem somehow funnier even though their appears to be less of ‘them’ than in S1. I suppose that’s based around Simon now living at Grandma’s house, rather than relying on people to pop round at a similar time. The characters are once again as incredibly well perceived as S1 and delivered as impeccably (Sam Spiro tho!). A must watch, I’d recommend it to anyone. 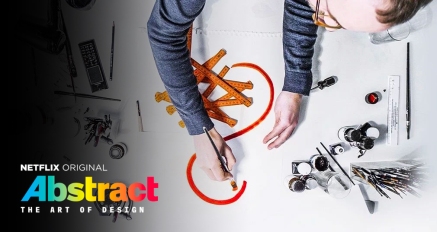 Netflix, for all its faults, does like surprises and drops shows out of nowhere. Also, to its credit, it invests in things other than just drama and comedy shows. Chef’s Table has had rave reviews for years, for example. The latest documentary series is called Abstract and focuses on various different elements of ‘design’, be it interior, graphic, illustration etc. Each episode focuses on one designer in that field and often someone at the top of their game. Not necessarily someone you’re aware of, but you come away almost in awe of their work and what they can achieve. They’re lovingly crafted episodes featuring great animations and interspersed with the designers work, interviews and shots following them in everyday life. 45 minutes long, a pleasure to sit through, very relaxing and engrossing at the same time. If you need an in – start with the graphic or illustration ones.

Sorry, what was that? Can you speak up, I can’t quite hear you… oh, doesn’t matter, it wasn’t worth listening to anyway.

SS-GB is the Beeb’s big new Sunday evening drama set in the alternate universe where the Nazis won the Battle of Britain in WWII and occupy the country. There’s been a lot of comparisons in the press to Amazon’s The Man In The High Castle as you’d imagine (something, months later, I still need to get round to watching after reading the original novel last year). This should be right up my street but there’s something about it that makes it difficult to get into or care about. With any drama like this, you have to power through the first episode – you don’t know the characters, you don’t know the situation and it was just about watchable (bar the complaints of mumbling. Personally, I didn’t notice but everything was very softly spoken, as you’d imagine give it’s a show about war and the resistance etc). Episode Two, however, completely lost me. Slow, laboured, incredibly lengthy scenes and the plot starts to become difficult to understand. It might be the case that this series is one that implodes in the final two episodes and you have to power through the first few but I imagine (talking to people in the office) a lot of people will give up on it. I’m certainly tempted.

On that note, I have given up on This Is Us, as discussed last month. It can’t have been much of a loss – I haven’t even thought about it until now.

NB: I feel I watched so many YouTube videos during this month from one particular show it warrants inclusion here. Last month saw me watching almost every bit of Billy On The Street available on YouTube (Elena though!) and this month I delved deep into Conan, and watched many, many of his remotes and bits and pieces from over the years.

To be honest, I’m writing these with very little inclination to do so and no one gives a monkeys what I think so let’s make them short and sweet.

Finger on the pulse as always, I got to round watching this when it appeared on the Netflicks and enjoyed it tremendously. I kind of had to given I used up my mobile data to watch it (internet was down, I had to personal hotspot). The one track shot throughout (stitched together, but still), the way we the viewer enter Thomson’s mind, his struggles and desperation for success. It’s all well done – but you don’t need me to tell you that. Worth a watch, obviously.

It’s one of my aims this year to watch more Woody Allen and Wes Anderson films – Annie Hall being one of the most famous by the former, and I was culturally aware of the balcony scene prior to watching the film. Allen is of course playing a version of himself here (surprise!) and the script is really sharply written so it’s no surprise that it’s included in so many ‘100 Best Comedy Movies’ lists.

This is New York in the rather more dangerous 1970s, although that doesn’t feature in its presentation. It just has an aura of being more real and less gentrified even though we’re following liberal minded artsy people. I also quite enjoyed the way the film is woven; Allen interjects, narrates parts and time jumps a little as he looks back retrospectively on the relationship.

This film has been on my cultural radar for years but I’d never taken the plunge until now. Tapping ‘Ben Whishaw’ into the Netflix search engine presented this as one of the options so I dove straight in. My first overwhelming thought: there’s a fair few EastEnders actors in amongst the British cast. My second thought: I’m quite enjoying this. I’m not usually one for films with any form of action whatsoever (my life has no action in it in any form, so I’ll be damned if my watching habits will override this) but this was right up my street. Solid, tick tick tick.